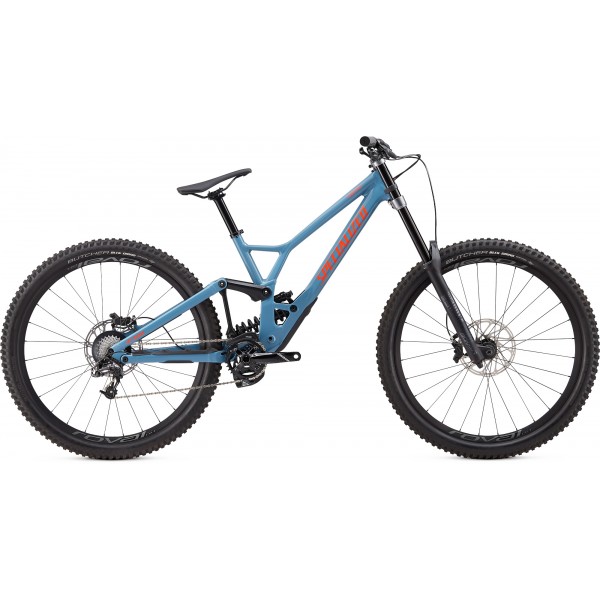 If you don't know the Demo, it's time you get acquainted. Think of it as a two-wheeled, dirt-eating Mario Andretti—it just wants to go fast. And this year, the Demo Expert 29 adds a new limb to the Demo family tree with an entyrely new design that makes railing corners and casting floatation spells over rock gardens easier than ever. It has a ground-up new frame, improved kinematics, better suspension under braking, bigger wheels, and all the newest fancy bits that make this the fastest Demo we've ever made. Yeah, we say that every time, but the race clock doesn’t lie.

We've refined the Demo’s kinematics and suspension design. We had one overriding goal—improve the bike’s ability to carry momentum, no matter how technical the terrain. More momentum equals more speed, after all. We began by altering the Demo’s axle path, making it more rearward in the initial stages of travel where sensitivity is most critical. The revised axle path reduces hang-up on square-edged bumps and that, in turn, transfers more energy to the suspension and less to you. Now, you finish a day of runs with less fatigue and more control.

Bigger wheels maintain momentum better than smaller ones—particularly over technical terrain. The Demo 29 weds 200 millimetres of suspension travel with bigger wheels in a package that’s crazy fast, yet still bike-park playful. While we were at it, we also improved the Demo’s suspension performance under braking and added a bit more anti-squat to improve its pedaling performance. Bottom line, the new Demo rolls faster through chunky terrain than its predecessor. Sweet.

The Demo 29’s new shock linkage places weight low on the frame, giving the bike a lower center of gravity and an even more confident and planted feel at speed. The new linkage is connected to a Trunnion-mount shock, which provides the Demo with the same 200 millimetres of rear suspension in a smaller (225x75mm) shock package. That smaller shock package helped us build a stiffer front down tube. And what’s more, the new Trunnion-mount shock features extra bushing overlap and adds ball bearings at the frame side of the shock, effectively boosting shock durability and making the suspension even smoother.

We’ve fine-tuned the Demo’s geometry, as well. A relatively short (105mm) head tube keeps handlebar height in the right spot with the 29-inch wheels. We also compensated for the increased wheel size at the bottom bracket, keeping it at 350mm, in order to strike a balance between cornering stability and ground clearance. And lastly, the reach was increased by 20mm across the size range, starting at 425mm with the S2.

The devil is in the details, though, and the same rings true for the Demo 29, where we added a bunch of little details that make it easier to live with. A newly designed, ribbed chainstay protector makes chain slap a thing of the past and nearly silences the drivetrain. A molded down tube protector, meanwhile, protects the frame from rocks while a co-molded rear fender protects the shock from mud and debris. Clearance for up to 29x2.6" tyres allows for plenty of traction. And last, but not least, you're going to find 148mm rear-spaced hubs, a threaded 83mm GXP bottom bracket, 200mm available post insertion, and internal and external cable routing options for rear brakes. Add it up and the Demo is as easy to work on as it is to find replacement parts for.

For the spec, we’ve hit the perfect balance of durability, light weight, and reliability. You're going to find a SRAM GX drivetrain, powerful SRAM Code R 4-piston brakes, a RockShox Super Deluxe RC World Cup rear shock, a BoXXer RC 29 fork, and our Butcher tyres with an all-new BLCK DMND casing that rolls fast and is ready for a ton of abuse.