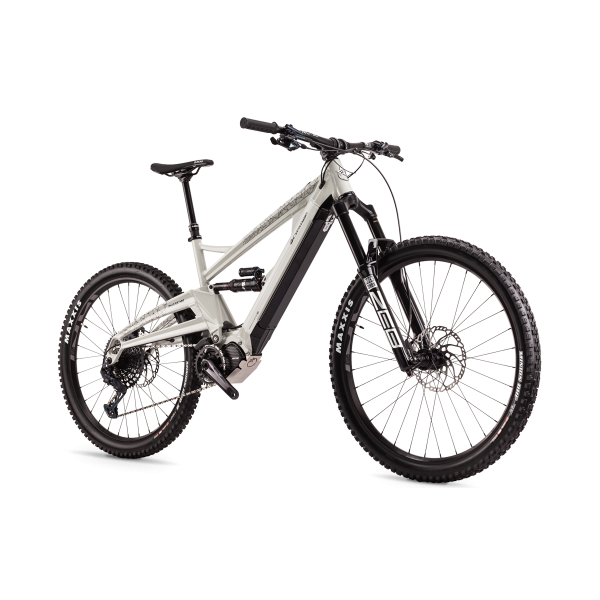 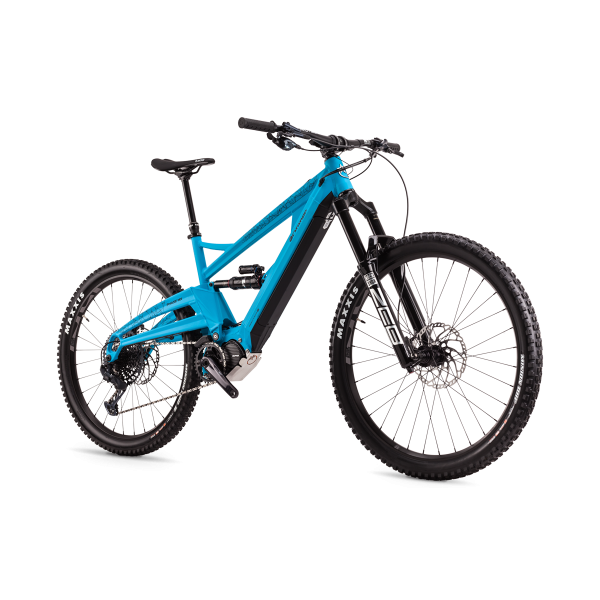 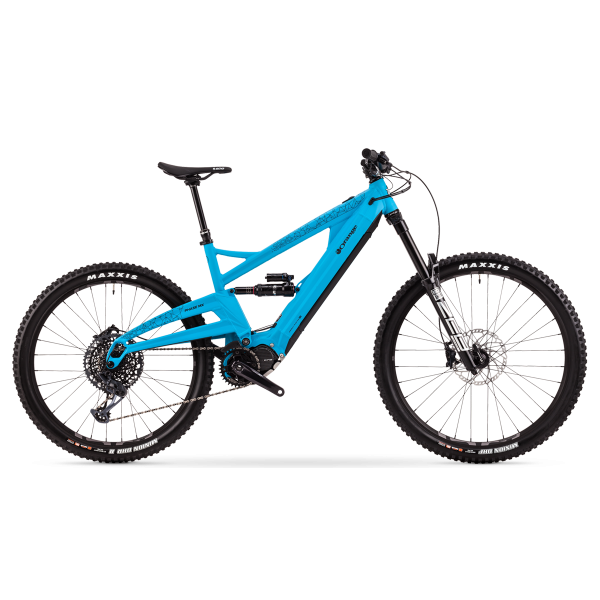 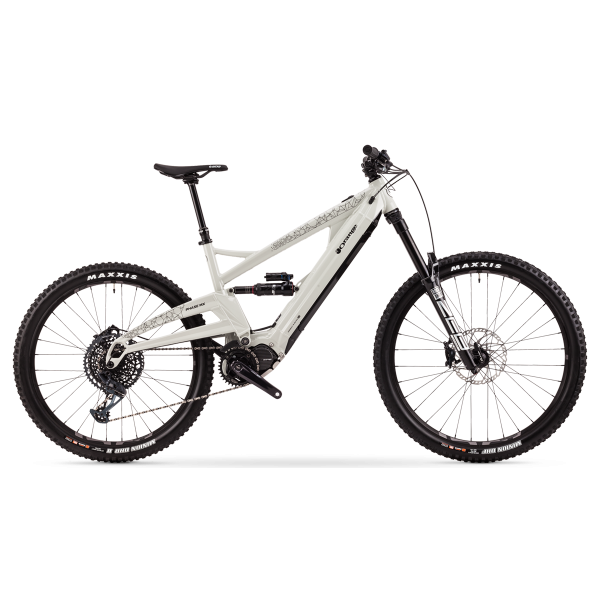 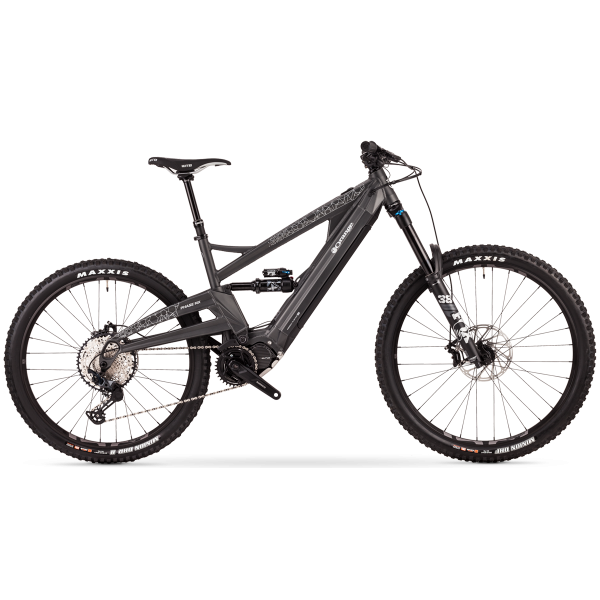 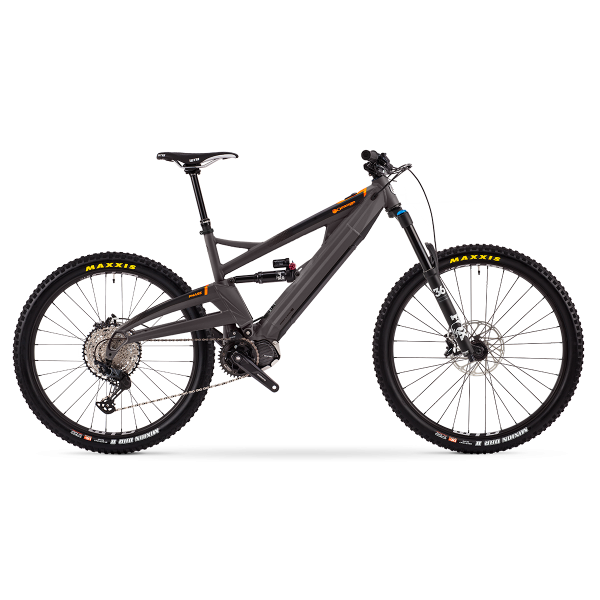 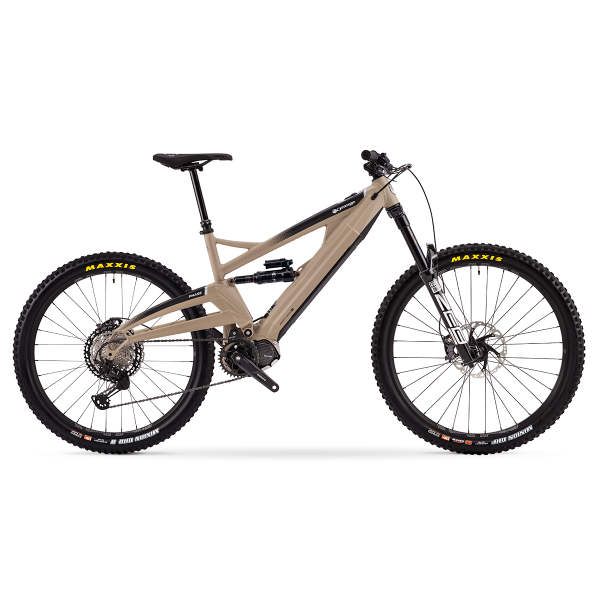 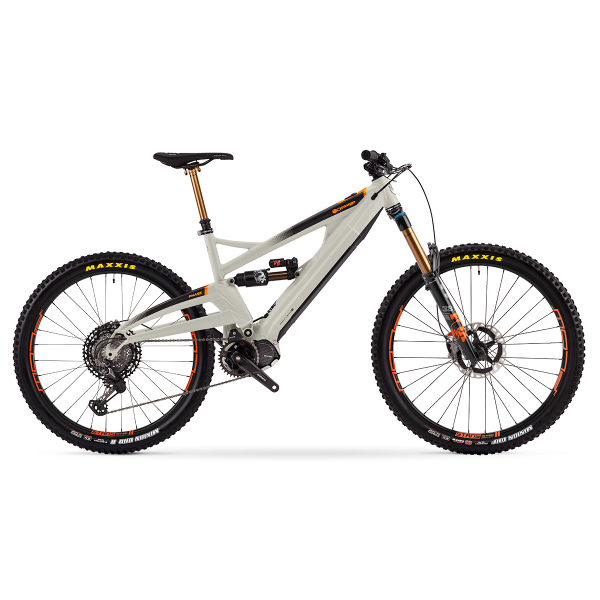 The Phase is our first mixed size wheelset E.P.O model. The positives which made us consider the producing the Switch 6 were also applicable to an E-bike and from then on the concept for the Phase was born. With a 29” front wheel paired with a 27.5 rear wheel and 160 mm of travel at both ends, this could potentially be our most versatile E.P.O model to date.

The Phase will be fitted with a Shimano 8035 battery, will have a keyless battery removal system with the power button fitted to the top tube. The phase has a 64° head angle and a 76° seat angle with a reach measurement on a size large being 488, the bike will also be fitted with a 230x65 metric shock and a reduced offset fork. We will have 4 specs available (Pro, RS, Factory and XTR) with four custom colour options.

Something that was painstakingly pored over was the suspension characteristic of the new Alpine 6, with everything we gained from that bike we wanted it to translate across into the Surge. Revisions have been made to the shock mounts to accommodate the new metric rear shock (230x65) and the increase in travel from 160 to 165mm, we have also focussed on increasing the amount of progression in the system which has seen a substantial increase, reduced the bike's anti-squat value and decreased the amount of pedal kickback in the system.

The Surge’s revised construction and shape is one of the biggest leaps forward over its predecessor, revisions to the front triangle in both construction and tubing profile have helped improve the bike's stiffness while still remaining compliant enough that the bike isn’t harsh, the new down tube is substantially slimmer and has a much more organic profile that the one that went before it.

While the rear swingarm has taken cues from our 327 DH bike in its profile, this has been done to help deal with the large amounts of torque being produced by the motor, the additional overall weight of the bike and the fact that this bike acts like your own personal uplift vehicle where descents are the order of the day.

The final piece of the puzzle was to have a battery that was easily removable. Hearing of riders doing “double battery rides” is very much a reality and we wanted a system that allowed this to happen as easily as possible. The battery is now removable with the use of just a key, so there are no more bolts to undo and it should take a matter of seconds to swap. Second batteries will be available from Orange and will come with the protective cover as standard.

We have worked closely with Shimano since the introduction of the very first Electric Powered Orange model. The Shimano drive assist philosophy is very much like our own. Their system does what it needs to do, then stays out of the way when it's done its job, letting you ride the way you want to.

The brand new Shimano EP8 unit is an improvement in every way to the previous model, making what we considered the best even better. The new drive unit is slimmer, sleeker and more compact than its predecessor, but don’t let its size deceive you. The EP8 packs a punch with enough power to get you to the top of any epic climb. The streamlined, integrated design not only looks the part, but it also allows for increased ground clearing for when the trail gets technical.

Everything about the EP8 is designed to allow you to focus on the ride. The new unit operates with little noise, letting you to focus on the natural sound of the trails without distraction. The newly refined Trail Mode utilises all 85Nm of the EP8’s power to effortlessly and intuitively assist you on your ride. Whether tackling loose sand or steep mountain ranges, the drive unit rapidly and seamlessly self-adjusts so that you can be safe in the knowledge that you’ll always have maximum traction and control. The harder you push, the more power will be delivered to assist you, meaning that no trail is off-limits.

The lightest full-power system, weighing in at just 2.6kg and with a 36% reduction in drag compared to the previous model, the EP8 will not hold you back. An improved clutch mechanism makes for a more responsive ride, with a smoother cut-off when pedalling above 25km/h. All of this puts you in complete control of the bike, with fluid pedalling and no surprises. The EP8 also offers an improved Walk Assist Mode, fully supporting you to push your bike with a one button control, allowing you to hop on and off with ease.

With the E-Tube Project App you can choose from 10 levels of assistance and set the maximum amount of torque best suited to your ride style across three modes, allowing for a fully customised ride before you’ve even put on your helmet. Preferences can be saved to different profiles so that you can quickly and easily switch between them for different terrains, or if swapping from the daily commute to weekend trails.

The EP8 also offers peace of mind. The smart, heat-conducting magnesium materials and a completely redesigned motor housing means that the unit handles rising temperatures on climbs easily, guaranteeing you maximum torque for longer. The new colour display is also fitted with an anti-theft mount and is optimised to be visible in bright sunlight, meaning that you can spend less time with your head down and more time enjoying what the bike has to offer.